Information reaching us had it that, some hackers have developed a software that allows them getting access to MoMo customers who accept to get a loan from alleged Fido SMS after they’re using their system acting as Fido Micro Credit.

According to the report, the hackers using their system to send SMS to random Mobile Money customers as Fido, telling them to have qualified for their loan service.

In the process, there will be a number generated by their system which includes the SMS and any MoMo user who try to apply for their loan ended up being scammed if they have money in those Mobile Money account.

One of the victim who spoke to AfricaWish stated that, he was asked to send his ID and other information when applying for Fido loan to the said number generated by their system.

He then sent them everything because he needed some money to add up the existing one in his mobile money account so since he once took Fido loan and the SMS appears on his phone, he have no option than to quickly give them every information on his ID.

Speaking to them during the process, they ordered him to accept a pop-up notification on his phone to accept the loan rules; He then saw Yes / No notification and press Yes.

They now tell him to wait till the next 15 minutes and the loan will arrive into his MoMo account.

According to the victim, he always has GH¢1,327 in his account but after some few minutes, he got a message that’s shows of him performing a payment to them rather; He quickly check his account and all the money was gone.

“I was shocked and have no hope so I search for Fido Facebook account, pick their number but they denied, they told me I was number 21 who is reporting same case but they have no idea about what and how the hackers using their system as Fido Micro Credit’…. all my money is gone after their system appears as Express-Pay instead of Fido”; said the victim.

Below Is The Hackers Fake Facebook Page And Fido’s Real Page: 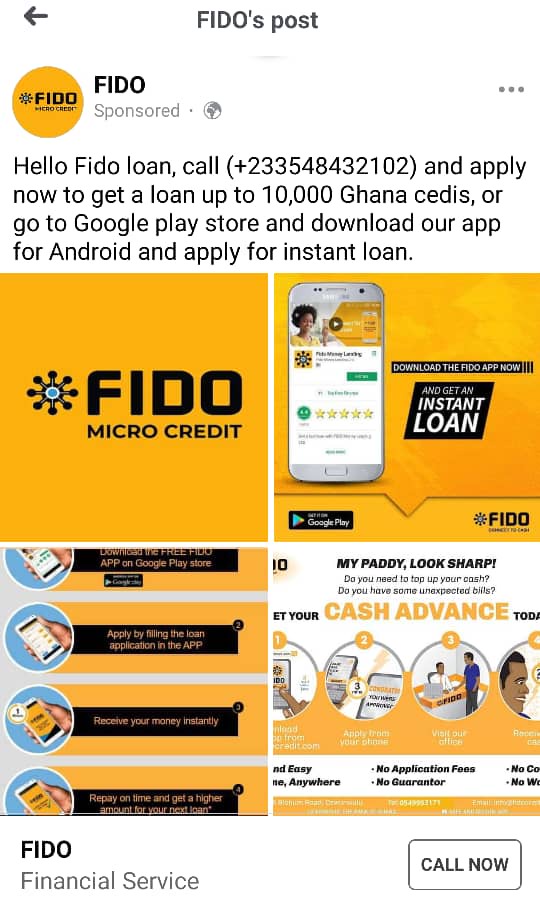 Fido’s Responds To Their Clients